Chat with us, powered by LiveChat
Register - contact us
Select language :

Rob Holding set the tone with a poor back-pass in the first minute and Östersund worked half-chances for Jamie Hopcutt, Brwa Nouri and Ken...

Rob Holding set the tone with a poor back-pass in the first minute and Östersund worked half-chances for Jamie Hopcutt, Brwa Nouri and Ken Sema.

The opening goal stemmed from a Saman Ghoddos ball forward. Holding could not untangle his feet to intercept while Kolasinac was also caught out. Hosam Aiesh had the shooting chance and he aimed for the bottom corner, With the aid of a nick off Chambers, he found it.

Östersund scored again 70 seconds later, after Alex Iwobi had surrendered possession with a heavy touch. The visitors had Sema up against Chambers following Ghoddos’s ball over the top and the danger did not appear pronounced. Perhaps, that is why Héctor Bellerín did not come across to help his team-mate. But when Sema backed into Chambers, worked a little trick and spun away from him, the sirens sounded. The left-sided attacker hammered a low shot into the far corner. 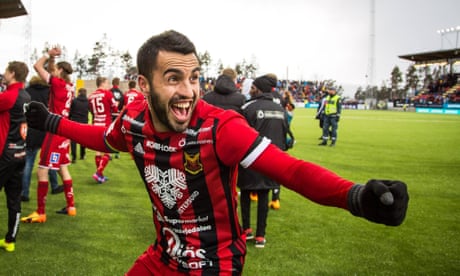 Ostersund, the club with ‘no history and no ideas’ that took on Europe

It said everything about Östersund’s first-half superiority that they could play out the final six minutes with 10 men, after Tom Pettersson went off to have stitches in a head wound. Jack Wilshere had Arsenal’s only real chance before the interval but he lifted his shot high.

Wenger’s team stirred upon the second-half restart. Kolasinac thumped home right-footed following an air-kick from Ronald Mukiibi and they would create further chances but it was not Welbeck’s night. Three times he erred when well placed. Wenger withdrew Wilshere on 75 minutes with an eye on Sunday but it was a bad look when Iwobi, who is also in contention for the final, went down with cramp in stoppage-time. It was a night of pain for every Arsenal player.

… we have a small favour to ask. More people are reading the Guardian than ever but advertising revenues across the media are falling fast. And unlike many news organisations, we haven’t put up a paywall – we want to keep our journalism as open as we can. So you can see why we need to ask for your help. The Guardian’s independent, investigative journalism takes a lot of time, money and hard work to produce. But we do it because we believe our perspective matters – because it might well be your perspective, too.

I appreciate there not being a paywall: it is more democratic for the media to be available for all and not a commodity to be purchased by a few. I’m happy to make a contribution so others with less means still have access to information.Thomasine F-R.

If everyone who reads our reporting, who likes it, helps fund it, our future would be much more secure.